Am I an Adult or Still a Child?

If you’re like me, even at 31 years old I still wonder. Sometimes I feel mature and wise. Other times I feel like an immature kid.

This question really started to eat at me after living in Brazil for a while.

I noticed a big difference in the level of independence of people in their 20’s and 30’s in Brazil vs what was expected growing up in Canada.

Relationships with family, work, and finances were much different here.

It got me thinking about my adolescence and the opinions I had relating independence to adulthood.

I had always associated adulthood with more than just passing puberty and having the right to vote.

But I didn’t have a clear definition for “adulthood”. Or how to know when I got there…

How Do I Know If I’m an Adult or Still a Child?

In tribal or past cultures, we used things like Coming of Age Rituals to create a clear contrast between childhood and adulthood.

Tribal or Past Cultures 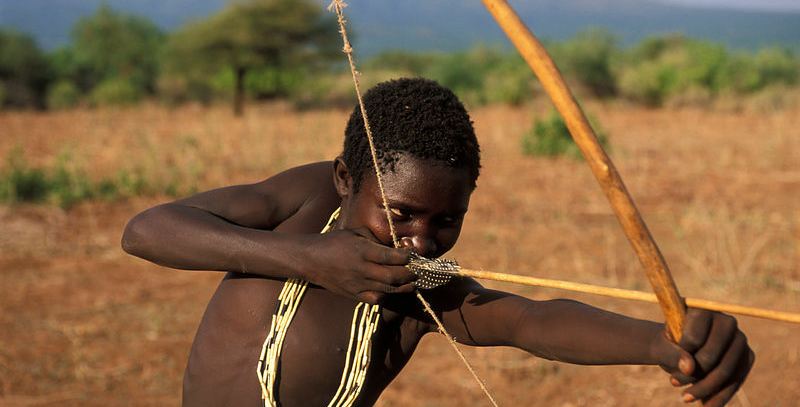 Some were mild and others more extreme…

Some of these practices are brutal and we can argue over their necessity and effectiveness. However, for these adolescents the process is clear. There’s an immediate change in their responsibilities and level of independence. You were a child, now you’re an adult. 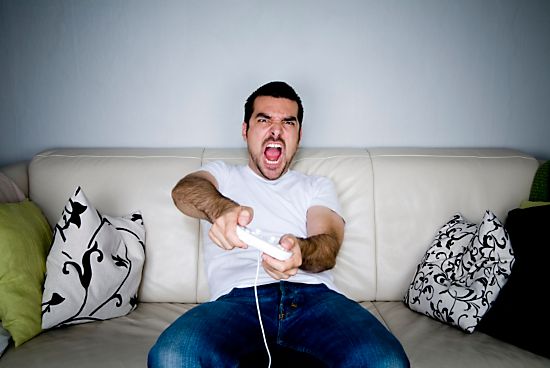 Today, in many parts of the world it seems like we have an extended adolescence. A period of several years where we don’t know if we are children or adults.

We go through puberty. We get the right to vote. But we don’t feel like we’ve grown up yet.

It seems like to become an adult we have to gain certain types of responsibility and independence.

But our cultures and families don’t clearly define how to do this and in some cases, actively hold us back.

Adolescence continues to extend and for this reason, we have people in their 20s and 30s feeling and acting like they´re sometimes still kids. Myself included.

Children possess such incredible imaginative qualities and the ability to lose themselves in awe at the simplest things. It’s a shame, but a lot of us tend to lose these qualities as we get older, myself included.

Pablo Picasso said, “Every child is an artist. The problem is how to remain an artist once he grows up”. 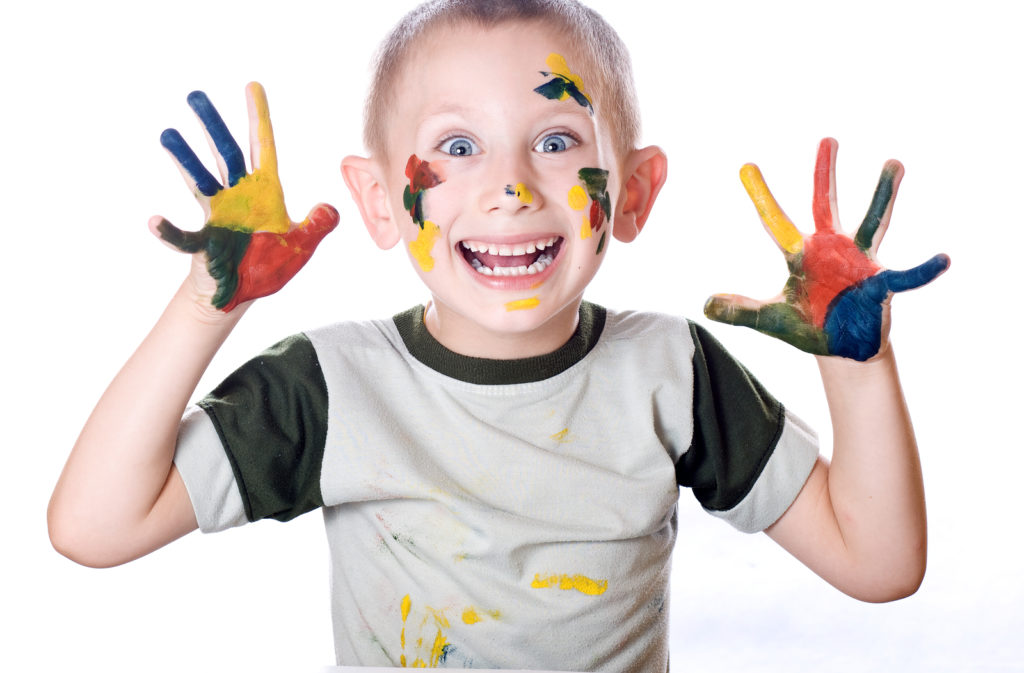 The process of becoming an adult is not about becoming boring, or losing a child’s creativity. Being an adult is really just about a change in responsibility and independence. It’s about owning your life. Financially, morally, ethically, emotionally, and intellectually.

Being responsible and independent are in no way mutually exclusive with having fun and using your imagination.

So why then does our society systemically beat the creativity and awe out of our children?

While at the same time fail to teach adolescents about the importance of becoming independent adults?

Why Is Society Killing the Child’s Mind and failing to Develop Independent Adults?

Today, it seems like our society oftentimes neglects or even inhibits the development of the independent adult, while at the same time destroys our creativity and love for life.

I think there are two reasons for this…

In his 2010 award winning book, Linchpin, entrepreneur and author Seth Godin explains it better than I can.

“Prior to the Industrial Revolution, gifted artisans made things. The more unique and individual the work, the more valuable it was.

The Industrial Revolution made producing homogenous products faster and cheaper.

Assembly lines and factories offered workers a deal: give up your unique skills and ideas in exchange for an adequate but steady paycheck. Schools and corporations championed the idea of fitting in over being unique. Homogenous people were needed as easily replaceable cogs in the factories where those homogenous products were made faster and cheaper.

This worked well until a few years ago when we reached the peak of manufacturing efficiency. Chasing ever-cheaper means of product production no longer works. The premise behind “the deal” with workers collapsed.

Now the economy must reinvent itself (and workers along with it). Going forward, successful people will be “linchpins” . . . those who stand out rather than fit in.”

Basically, what Seth is saying is that our society and school system for the past 200 years has been built to produce adults who sit down, memorize, shut up, and don’t think for themselves. All industries are factories. Even if you’re a doctor, engineer or a manager you were built to be replaceable, not unique or independent.

It’s very difficult to grow into an intellectually mature adult if you’ve always been trained to do what your boss, teacher, or superior tells you.

There’s been a shift in our core society, family and personal values. Somewhere along the way we started to seek comfort and easy living for ourselves and children over independence and growth.

When we trade independence and growth for comfort and ease we stay in adolescence far longer than necessary. Sometimes into our 20s, 30s or in the worst case, we never get out….

Like this 37-year-old who lives in his parent’s garage. He passed puberty and can vote for Trump, but somehow society forgot to remind him to actually grow up…

So how do we become adults?

Finding Our Own Path to Become Independent Adults

As with anything complicated, start by looking inside first. Ask yourself:

Think about your answers.

After asking myself these questions and doing a bit of research I was able to define several thresholds we need to cross to become adults.

What are these thresholds we need to pass to become adults? And how do we know when we’ve crossed them?

The 5 Thresholds We Need to Pass to Become Independent Adults

As we progress from child to adult I’ve identified 5 thresholds we need to pass over. From the simplest to the most complex, I’ve listed them here.

This first one is pretty simple. You reach biological adulthood when you hit puberty. Which is around 11 to 13 years old.

Also, very simple. This is the age when your country says you can enter into a legal contract. Varies from 16-21 years old in most parts of the world.

Usually coincides with the legal age where you can vote, drive a car, drink alcohol, join the military, get married, etc.

You reach moral adulthood when you are fully independent within your society.

This is usually the time when you leave your parent´s house and no longer accept any money from them for support.

Can also be seen as the crossover point when you start to produce more than you consume and are no longer a drain on society.

This age usually varies between 16 and 30 years old.

Side note on Canada and Brazil: Here’s where I saw a huge cultural difference between Canada and Brazil. When I was 18 years old (back in 2004) it was time to get out of the house. If you stayed living at home with your parent’s people looked at you strange. In Brazil, I see people living with their parents and being financially supported until 30. The value of financial independence vs closeness of family is much different in the two countries. Neither culture is necessarily better or worse but it was this aspect of Brazilian culture that initially shocked me and sparked my interest in researching this whole adulthood topic.

You are ethically an adult when you’re responsible for your own life, decisions and actions. Any decision that you make is now yours and no one else will be held accountable for your actions.

Your parents and society have a partial responsibility for the childhood portion of your life. But when you reach ethical adulthood you accept this childhood is past, you accept your situation here and now, and you decide that from this moment on you are fully responsible for your decisions, and actions.

Today, in some cases ethical adulthood is tied to legal adulthood. The age where you are responsible for your actions under the law such as in murder trials. However, in the middle ages it should be noted that you could be put to death for committing a crime as young as 7 years old.

Ethical adulthood should be seen as the time when you take personal responsibility, not just are responsible under the law.

Ethical adults don’t view the world in terms of right and wrong. Only actions and consequences.

Emotional adulthood is an extension of ethical adulthood. It’s the time when you take responsibility for your emotional responses.

Emotional adults allow themselves to feel a full range of emotions (negative or positive) without repressing or losing control to the response.

However, emotional adults understand that their emotional responses are based on their unique interpretation of an event, and not directly caused by the event itself. 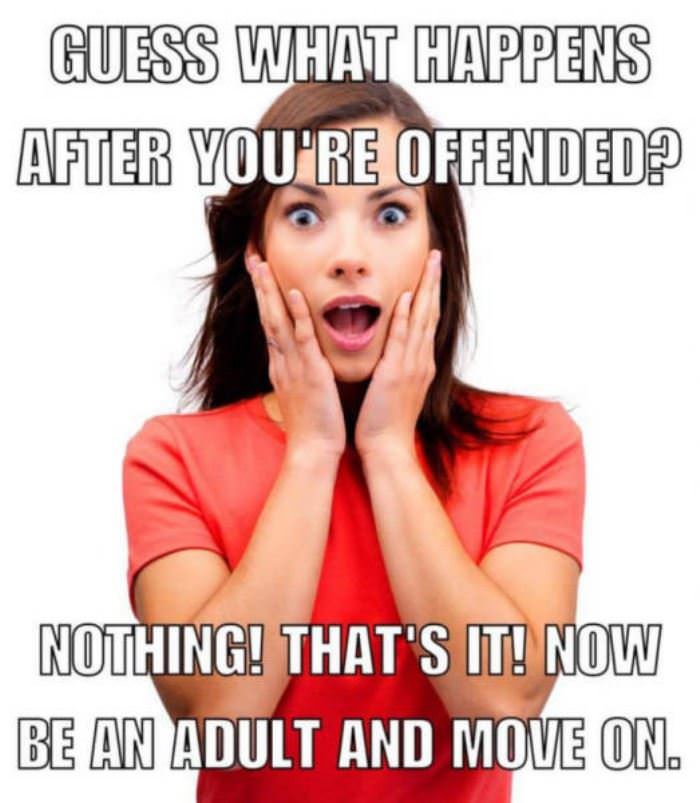 An emotional adult doesn’t get “offended”. He observes his response to the stimulus and instead asks “why do I feel this way?”.

You´re intellectually an adult when you develop and live by your own beliefs, views, ideas, and values based on your experience vs not just blindly accepting what your parents or society tells you.

Being a copycat and mimicking everyone and everything works really well in childhood to get you up to speed on the big, new world. However, you don’t reach intellectual adulthood until you start critically examining things and act based on your conclusions.

An intellectual adult also respects that everyone else will have different beliefs, views, ideas and values than himself and that’s okay. Because other intellectual adult’s ideas are based on their unique experience in the world as well. 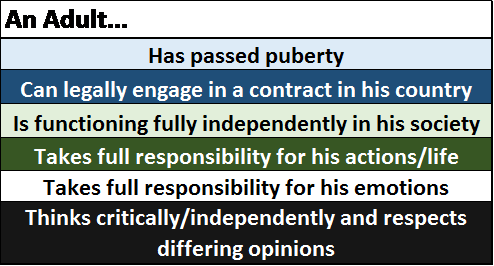 I think it’s safe to say that a lot of us are still working on crossing the adulthood threshold in at least one category.

I’m also sure that you will define adulthood a little differently than I have here.

However, I hope that most of us can agree that becoming an adult is about more than just growing pubic hair and having the right to vote. 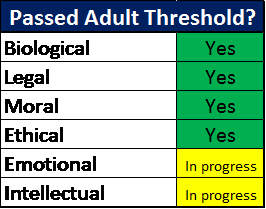 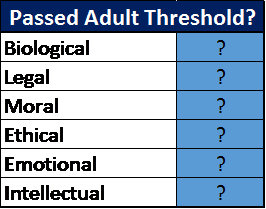 The world is getting more complex. Our roles and responsibilities are changing rapidly.

However, one thing that isn’t changing is that children still need to become adults.

I think it’s important that we try to clearly define what it means to be an adult. And to value walking the path to become one.

What does being an adult mean to you?

How important do you think it is for people to grow up?

Write in the comments below, or send me an email any time at tyler@tylerjwatkins.com